The History of Pre-Decimal Coins

The 14th of February 1966 saw Australia's official conversion to decimal currency, the dollar had arrived. The pound shilling and pence based on the British system that was introduced to Australia in 1910 was a memory, with many having found the British system to be far to complicated.

It took 10 florins, or 20 shillings to make a pound 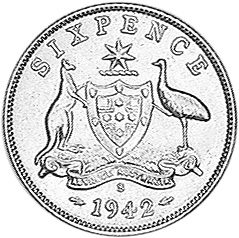 What about 4 crowns, worth 5 shillings each

No wonder it got so confusing!

You could also use 40 sixpence, or 80 threepence to form a pound

And with such a confusing system came an even more confusing amount of slang; a threepence was a Trey, a sixpence was a Zac, a shilling was a Denner, a florin was Two Bob, a pound was a Quid, ten shillings was Ten Bob and a crown was called a Casey's Cartwheel named after the man who proposed it R. G. Casey